Hi. My name is Byron. 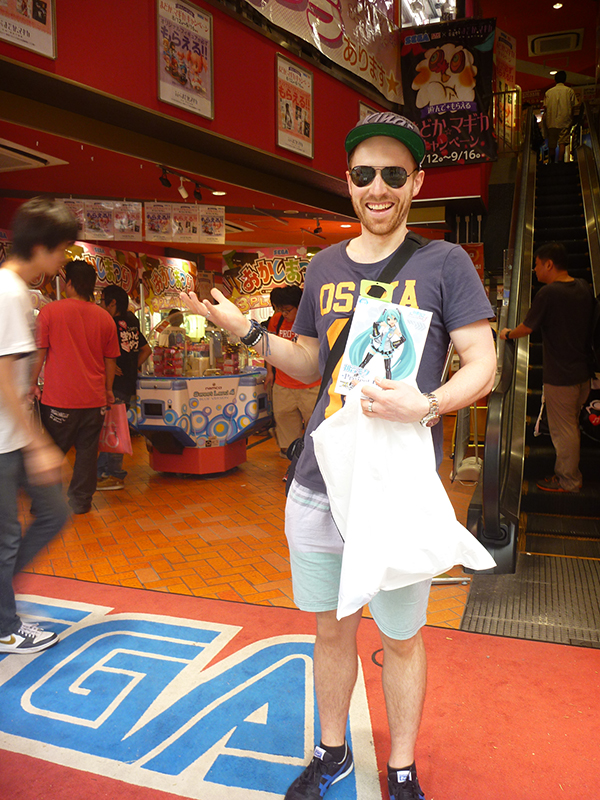 I’m the cartoon obsessed creator of ToonsAnimeManga.com. I help crazy cartoon fanatics and artists level up their artwork and rocket-fuel their characters into outta space!

That guy, to the right, with the grin from ear to ear is me. That photo was taken just after I won a Hatsune Miku figurine on my birthday in the amazing Akihabara, Tokyo, Japan. I’m proud to say it only took me three attempts (Beginners luck).

So why are you here? Let’s introduce ourselves.

Maybe you’re here because, like me, you’ve told yourself that ‘I can’t draw‘ more times than you’d like to remember and finally it’s time to prove yourself wrong. Maybe you’re here because you feel your artwork has hit a roadblock and you’re not improving or enjoying it the way you once did. Finally, you could simply be here because you just love cartoons and you want to learn how to draw, whether you’re young or old, there has never been a better time to start.

Whatever reason you have for being here, thank you, I’m so glad you’re here!

My goal is to inspire the hell out of you and to prove that if you dedicate yourself to your artwork then absolutely anything is possible! Anybody can draw, let me repeat myself, Anybody can draw. I’m going to surround you with the tools you need and a community of awesome people ready to pick you up, whenever you fall, and who will raise you on their shoulders to celebrate your inevitable success.

You are capable of great things but there is no gain without just a little bit of pain.

I grew up in love with Cartoons! As a young boy that grew up in the 80’s my first real obsession was with the Teenage Mutant Ninja Turtles. At the time they were some radical and bodacious dudes, and most parents were worried about the negative effect they would have on my youthful generation.

I think I turned out alright, despite the fears….

At the age of 11, in the mid 90’s, I found Toy Story, seriously who didn’t? I fell in love with Buzz Lightyear and Woody and the colorful posse of characters around them. I had the ambitious goal to work for Pixar within 3D animation so I could create something as amazing as Toy Story!

However I always thought that artwork, and the ability to draw, was a natural ability and a talent that you were either born with…or not. I simply could not have been more wrong (“What an idiot!”) . I told myself that I didn’t have this mysterious thing called “natural ability” and spent my years jealous of the talent others had without trying to find it myself! Let’s get something straight guys & gals;

If you want something BADLY enough, then anything is POSSIBLE.

At the age of 28 (May, 2013), struggling in an uncreative and very black and white career, I sent my heart on a journey to find my passion and my soul! Returning home at 12am after finishing my late shift at work, exhausted, I slumped into my computer chair. Magically, I picked up a pen and found the closest piece of scrap paper and I started to draw. For the next few hours I found myself absolutely absorbed in my incredibly basic cartoons, no longer exhausted it seemed.

Quite frankly, those drawings were embarrassing. However the quality of drawings I made that night was not the thing I was proud about, instead it was that I’d found my passion and an unbeatable desire to work my absolute ass off to become the artist that I’d always wanted to be.

I’m a nerd, I love video games, I love cartoon characters, I love Japan and I love drawing both digitally and traditionally…so why not combine all these passions into one giant site of “AMAZINGNESS” and maybe, just maybe, inspire a community of talent along the way.

And thus, in mid 2013, ToonsAnimeManga.com was born! It wasn’t until after my return from Japan that I managed to bring my idea to life.

I’ve created ToonsAnimeManga.com because, first and foremost, I wanted to make sure that you don’t make the same mistake I did. I want to inspire artists around the world and show YOU that anything is possible, you just need to spend the time to make it happen!

No I’m not a Pro artist and I certainly don’t work for Marvel or any other major Comic publisher for that matter. What I do offer you however, is a fellow comrade, just a normal guy down in the trenches with you – a nerd who sits at a computer all day long, loves to play video games, and really LOVES creating characters that come alive and jump off the page.

We’re in this together. It’s not going to be easy but we’re in it for the long haul, right? If you want to draw like the Pros, if you have a dream of working for Pixar or creating comics for Marvel then it’s going to be one the hardest and most rewarding things you ever do, it will require flawless dedication but I can get you there, we can get each other there.

Don’t be a fool like me, start today and let me help you level up your artwork.