Although I grew up in a different era I can still appreciate the cartoons of today. Ben 10 caught my eye ever since I first watched it on TV and I can see why the kids of today have fallen in love with the series and characters within. Ben 10 has had a few different versions of Ben himself but I thought it was time that I learn how to draw Ben 10 Omniverse.

I’d seen many artists on YouTube, as well as read it in art books, that show how the artist constructs a character using basic stick figures to gain the pose and the character stance. It’s something that I’ve been trying to practice more so that it’s easier for me to create different poses for my characters.

Some time ago I wrote a post on how to draw characters with kick ass poses and it’s clear to see that just because you can draw a character doesn’t mean that you’ve given it a strong pose to portray the action the character is in. Construction of character poses is something we all need to work on and learning to master the stick figures approach is a perfect way of doing so.

You’ll see with in my review on How to Draw Characters the Marvel Way the author, Jim Lee, also talks about how to construct all of the Marvel Characters and poses using stick figures first and the adding cylinders, spheres and cubes to the stick figures to find the perspective! This really is a great way to work and I’ve found that it’s helped me greatly to visualise the character more quickly.

How to Draw Ben 10 Omniverse 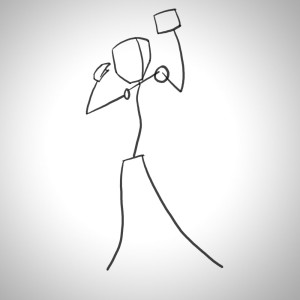 how to draw ben10 omniverse- the stick figure

The first step to drawing Ben 10 Omniverse is to create a pose for the character. The pose you select should be strong in portraying the action or mood you wish to show to  to your audience.

Although I’m not a professional at this type of approach you can see the theory behind it. I’m also trying to use curved lines to create more action and personality to the pose.

Just by doing something as simple as the drawing the left you’ll see that our brain is already starting to understand the character and this will help us draw Ben 10 more easily. Once your artwork becomes more than just a visualisation in your mind you’ll find it’s easier to work it through to completion.

how to draw ben10 omniverse- The Shapes

Once you’ve got the stick figure drawing in Step #1 it’s time to start adding in some shapes around the stick figure. I like to keep it as simple as I can and forget about the detail in the clothing, watch or other parts of Ben 10.

Our aim with the shapes is to understand the perspective and ensure we make that look as realistic as we can, based on our experience levels, before moving onto the detail.

In the picture to the left I show you what my character looks like with the shapes over the top of my original stick figure lines.

Step #3 Fill In The Detail 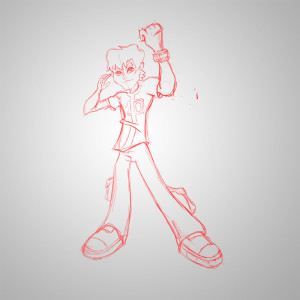 how to draw ben10 omniverse- The Detail

The final step is to start adding in the detail. Because we worked so hard in Step 2, to get the perspective correct, it’s going to be a little easier for us now to add in much stronger detail to our character.

There is no real key to this stage and at some times it can be some trial and error before you create something that you’re happy with. Don’t be afraid to throw down your lines and then erase them if required. Art at times can be filled with trial and error until you get it just the way you want.

Over time you’ll improve and everything will be much faster when it comes to getting your final product.

Experiment and have fun with it.

How To Draw Ben 10 Omniverse – The Complete Video Guide

If you want to see exactly how to draw Ben 10 Omniverse using the methods I’ve discussed above then check out my video guide. This is speed drawing showing you exactly how this piece of artwork came together. If you’re subscribed to my YouTube channel you might have seen this already but if you haven’t then don’t forget to subscribe and be first in line for more new videos coming your way soon.